See "The Old Old Days -- ca. 1968" for my first exposure to an actual computer. Nothing about Python there. But. It's what motivated me to get started learning to code -- I was fascinated by games that involved randomization. Games with cards or dice.

After filling in a little background, I will get to the Python part of this. First, however, I want to compare the olden days with what we have now.

From 1969 to 1974 I had access to the high school's IBM 1620. This means programming in IBM's SPS assembler, or using the NCE Load-and-Go Fortran compiler. See https://www.cs.utexas.edu/users/EWD/transcriptions/EWD00xx/EWD37.html for a scathing review of the problems with this machine. 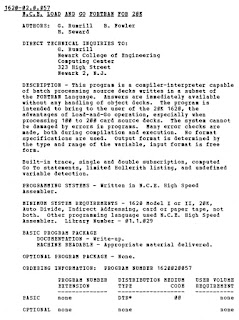 I'll repeat that for those skimming, and wondering what the Python connection is.

My interest is in simulation and randomness. So. I have this question of how to create random sequences of numbers limited to 4-digit integers.

There are a number of classic Pseudo-Random Number Generator (PRNG) algorithms from the early days before Mersenne Twister took over in 1997.

We used to be super-careful to emphasize the letter P in PRNG because the numbers we're really random. They just behaved randomish. This is contrasted with real randomness, also known as entropy. For example, /dev/random device driver has a fair amount of entropy. I think it's comparable to a person throwing dice across a table. I think it's as random as a noise-generating diode with a sample-and-hold circuit to pluck out random values from the noise.

Back in the olden days, it was stylish to perform an empirical test (or ten) to confirm we really had "good" random numbers. The built-in libraries that came with your compiler or OS could not be trusted without evidence.

One of the classic (bad) PRNG's is the "Middle-Squared" method. See https://en.wikipedia.org/wiki/Middle-square_method. I learned about this in the 70's. And used it in the old NCE Fortran.

Did I mention that the Fortran compiler used four decimal digits for integers? That means plucking the middle two digits out of a four-digit number. How random can that be?

Not very. The longest possible sequence is 100 numbers. If, by some miracle, you found a seed number with the right properties and only two digits.

Nowadays I can, in Python, do a quick middle-squared analysis for all 100 seed values.

This kind of thing.

Which you can run and see that all of my early attempts at games and simulations were doomed. The seed values of 76, 42, and 69 provided kind of long sequences of almost random-seeming numbers. Otherwise, pfft, this was junk computer science. 50% of the seeds provide 5 or fewer numbers before repeating.

For blackjack, a few random numbers for shuffling might be enough. For other games, the lack of randomness made the outcomes trivially predictable.

What's funny is how far the state of the art has moved since then.

It's hard to understate these two advances, particularly, the second one. I'll return to the algorithm thing a lot in the next few posts.

My focus was on games and randomization. Ideally, simple stuff. But... under the hood, it's not simple. I've spent some time (not much, and not in much depth) looking at the tip of this iceberg.

It served me as an incentive to dive just a little more deeply into a topic, like math or a programming language or a statistical tool.